Few months back my work location was changed to office inside MEPZ (Madras Export Processing Zone). This is one of the Special Economic Zones in Tamilnadu. It houses big exporting companies. My company exports software. So we are also inside this. This post is about the things I thought while riding my bike while coming back from office today.

I was turning that right turn immediately next to my company as usual, after leaving the office. It’s a 4 road junction. So while turning I used to focus more on the right side of the turn. After completing almost 80% of the turn I saw a glimpse of a person requesting for a ride. At the time I saw him, I’d gone about 5 feet away from him. I didn’t stop for him for no reason. Usually I will stop for people asking for a ride. Actually this MEPZ area has only one gate, only through which we can enter this area. I must travel about 1.5 Km to my company from this gate. There are many companies in this area and people have variety of transport options to reach their respective companies from the MEPZ gate. Some use their own transport and some use the shuttles arranged by their respective companies. People who don’t have the above 2 options must walk the distance. Even though this walk can turn out to be a pleasant one, due to the tight schedules people mostly can’t enjoy the walk. Walking would seem like a highly time consuming process (10 to 20 minutes), during peak office hours. In order to reduce this time (and effort), instead of walking, people used to ask for a ride to many of the vehicles crossing this area. The poor fellow who didn’t get a ride from me also, must be one them.

When I first moved to MEPZ office, I never gave a single ride to any person. I usually like to walk a lot. So I never saw a reason why people avoid walking and ask for a ride. But after some time I started thinking about how it would feel to walk every time coming to office. Though it would be a very healthy activity, when I’m rushing to office this activity would turn out to be very straining and frustrating. So I started helping the people who ask for a ride. So today’s event was very strange. After crossing the guy and reaching 40 Kmph, I tried to realize why I left him. I thought that he should have come little bit more into the road to grab my attention quickly. But this is highly risky for the safety of that person. And then I thought that his gesture was not bold enough to convince me to hit the brakes. I realized that this could be a valuable reason. Because after crossing that person, to give a ride, my subconscious mind expected that person to run to the bike and mount. But that person was very tired. His gesture to ask for a ride was so weak that my subconscious mind thought that he wouldn’t be able to run to the bike and mount. My subconscious mind expected an active person and encountered a weak person. But the controversy here is that a person who is too weak to mount a bike definitely won’t be able to walk that distance.

The thing I learned from this event is that I needed to train my subconscious mind to give priority to people who were weak when offering some help. I remembered the words of Jesus. A doctor is needed for a sick person not a healthy one. That poor fellow I ignored might have waited another 5 or 15 minutes to get a ride. But only if I had waited few seconds for him to walk to my bike and mount slowly, I would have helped a weak and tired man. 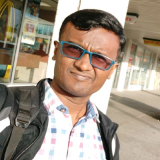